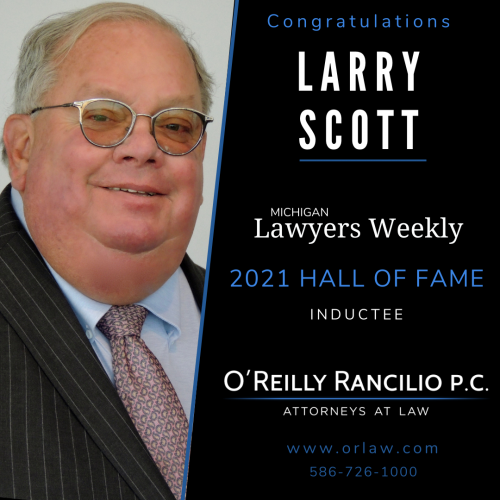 O’Reilly Rancilio attorney Lawrence “Larry” Scott, of Harrison Township, was recently named to the Michigan Lawyers Weekly Hall of Fame Class of 2021. The award recognizes Michigan legal leaders over the age of 60 who have practiced for 30 years or more for their successful careers and valuable contributions to the community.

In addition to serving as a shareholder and member of the O’Reilly Rancilio Board of Directors, Larry works as a metro Detroit commercial litigator. He has been in practice for more than 42 years. In his work in litigation, Larry represents individuals, business owners, and banking institutions to resolve disputes involving shareholder agreements, contracts, mortgage fraud, intellectual property, employment, and more.

An effective trial lawyer, court-appointed mediator, or private facilitator and arbitrator, Larry is often called upon by his fellow peers as the “go-to” lawyer in Macomb County for assistance in resolving difficult and high-risk cases.

When he’s not in the courtroom or at the office, Larry offers pro bono work for the Michigan Special Olympics and was one of the founding members of the organization’s “Water Warriors” fundraising event, a 5-day 450-mile watercraft ride along Lake Huron. In addition, he volunteers with the Detroit Zoo, where he has served on their Board of Directors since 2012, and with the Henry Ford Macomb Hospital Ambassador Club.

Larry and his wife Michele have two adult children. Along with receiving the Hall of Fame honor, Larry has earned Super Lawyers status every year since 2008. He graduated from the Detroit College of Law in 1979 and earned his bachelor’s degree in Business Administration from Albion College in 1976.

Dec
1
The U.S. Equal Employment Opportunity Commission (EEOC) recently posted updated and expanded technical assistance related to the COVID-19 pandemic, addressing questi… Read More
Nov
12
Business owners want to know where you shop, what products you like, what you may want to buy in the future, and much more. Data brokers are companies that utilize t… Read More
Read More From Our Blog 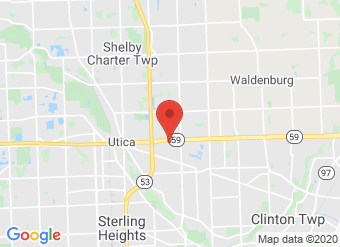